Krill are tiny shrimplike creatures that live in the ocean. They make up the largest biomass on the planet and are found in every sea.. but the ones we’re concerned with are known as Euphausia Superba and live in the Southern Ocean off the coast of Antarctica.

Krill oil is an extract prepared from krill. It’s a rich source of omega-3 fatty acids, especially EPA and DHA, bound mostly to phospholipids.[1] It’s also a natural source of the antioxidant astaxanthin.[2]

How Does Your Body Use It? 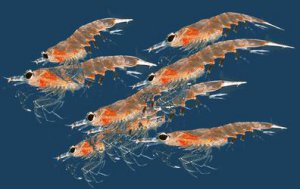 Astaxanthin is another important component of krill oil, and has been shown to be a very powerful antioxidant with multiple potential health benefits of its own.[6] Its ability to pass the blood/brain barrier and deliver benefits directly to the brain has led some scientists to refer to it as “a potent candidate for brain food.”[7]

Why People Take It

Omega-3 fatty acids are commonly suggested to help improve cardiovascular health.[8] In the case of krill oil specifically, studies have suggested that the phospholipid content enables greater absorption and utilization of Omega-3’s,[9] and that lower doses are as effective due to this difference.[10]

The reason for this advantage is thought to be the structure of human cells themselves, since cell walls are also phospholipids. The Omega-3s in fish oil, by contrast, are bound to triglycerides.

Many consumers also choose krill oil over fish oil because the pills themselves are generally smaller and easier to swallow, and lack some of the unpleasant side effects fish oil is known for such as “fish burps.” This is often attributed to the astaxanthin content of krill oil.

Krill oil has also been suggested to have positive impacts on cholesterol,[11] PMS,[12] arthritis,[13] and weight management.[14]

Are There Negatives or Side Effects?

How To Choose A Krill Oil Supplement

Since the main reason one would take krill oil is the Omega-3 content, it stands to reason that the amount of those nutrients are important in choosing a krill oil supplement. Quality krill oil should contain (per 1,000 mg dose):[15]

Delivery method – some manufacturers have claimed a new type of capsule, called a caplique, provides superior nutrient delivery. However, no evidence to support this claim can be found at this time. There is some concern that the method of sealing capliques (a band is placed around the seam of a capsule and possibly heat-sealed) could actually contribute to oxidation of the krill oil.

Conclusion … capliques are [at best] not superior to traditional softgels, and possibly even inferior.

Extraction method – as demand for krill oil has grown, manufacturers have experimented with krill extraction methods that can be used in mass-production processes. Most are now using solvent-based extraction methods, which inevitably leave traces of solvent in the final product. This method has also been found to retain less nutrients than previously used methods[16] , leading some manufacturers to further alter the natural product in order to retain desired nutrient levels.

Conclusion … evidence would suggest solvent based extraction to be an inferior method, and supplements using this method less desirable.

Overall Freshness – Some studies have suggested that the nutrient levels in krill oil can deteriorate over time.[17] However, current mass-production methods have led to widespread delays in processing extracted oil. In other words, once extracted krill oil can sit for months before being encapsulated and bottled, creating the potential for oxidation and the loss of valuable nutrients.

Conclusion … fresher krill oil should be chosen whenever possible.